I totally forgot to post yesterday's picture so here it is.

As I posted about here I am working my way through Jeff Wignall's book Exposure Photo Workshop.  Lesson 2's assignment is to take a picture in a relatively dim location by cranking up the ISO as far as it will go and see what you can do.  Well I have a ZLR camera which is a zoom-lens reflex camera.  Wikipedia defines this as "A Zoom-lens reflex (or ZLR) camera is a Single Lens Reflex (SLR) camera having an integrated zoom lens rather than the interchangeable lenses found on other SLR cameras."  Jeff Wignall calls this advanced zoom.  Either way it means that I do not have all the bells and whistles of a SLR camera including the fact that my highest ISO is 400 and it is much higher (about 1600 or higher) on most SLR cameras.  So the other day I tried to take a picture at night in my house using a 400 ISO...no success.  Yesterday I was in a dimly lit restaurant with a friend and her son and so I took this picture with my ISO at 400 and  I wouldn't have gotten this shot without cranking up the ISO.  I know there is a light above the flamingo which looks likes it is giving off a lot of light but in truth it was not.  Here is the picture: 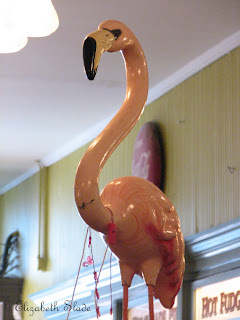