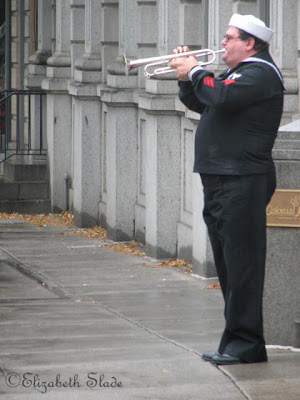 On this day, November 11, 2009 I would like to take a moment to thank the men and women of the armed forces for their service to our country. In my town of Frederick, MD they do a wonderful tribute to veterans by playing echo taps from Mt. Olivet Cemetery to Memorial Park. This is about a mile long and they had 14 buglers playing down the line today. Each bugler played taps once looking straight ahead and then turned to their left and played taps again. When they finished their 2nd time the next bugler would play and it would continue on down the line until they finished with the last bugler in the belfry of Calvary United Methodist Church. I was standing between the gentleman above and another gentleman and it was wonderful to witness. It was raining during this event and before I left the house I thought about not going until I had a talk with myself that pretty much went something like this. "Hey, Whiney, what is your problem? There are men and women serving this country day and night in all kinds of weather get off you butt and go." So I did and I am embarrassed that I almost didn't. Thank you again to all veterans for all that you do.
Posted by Lizzy at 2:22 PM